Did you know plasma cut holes using the Daito CRII series Plasma Coping Robot are acceptable by the (AISC) American Institute of Steel Construction as clearly stated in their 2005 AISC specification and other publications such as Modern Steel construction magazine. (See the included Documents)

The 2005 AISC States that “thermally cut holes shall be permitted with a surface roughness profile not exceeding 1,000 µin as defined in ASME B46.1. Gouges shall not exceed a depth of 1/16.” 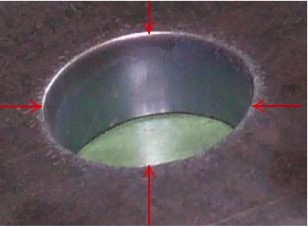 Lab results included in this documentation.

Daito Test results are a direct reflection as to the unrelenting commitment to the high quality equipment that Daito has been building for over 56 years. Daito has been perfecting the plasma robot for structural steel and its ability to plasma cut bolt holes, ever since we participated in the 2005 Montreal NASCC (AISC) with the first prototype CR1040 plasma robot. Since that time Daito has been updating the construction, software, cutting systems, robot and overall machine for the quality of cuts you see in these tests.

DAITO is your only choice when it comes to high quality metal work machine tools for structural steel industries.